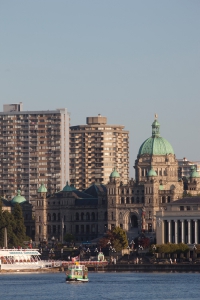 The City of Victoria, located on the Southern tip of Vancouver Island, is Western Canada’s oldest city and the capital of British Columbia. As such, it is home to the provincial legislature.

Victoria has the mildest climate in Canada and with greenery in evidence throughout the year, there is little wonder that it is called the City of Gardens! Victoria boasts a spectacular setting of ocean and mountain vistas and offers numerous economic, cultural and recreational opportunities.

The Inner Harbour is the heart of Victoria and for many boaters is the gateway to the City of Gardens. Bordering the harbour are the ivy-covered Fairmont Empress hotel, the world-renowned Royal British Columbia Museum and the magnificent BC Parliament Buildings.

Governments at all levels provide a major employment base in the City.

Visit the web site of the City of Victoria.